By now, you may have heard the news that Comcast will be imposing archaic 1.2Tb data caps on customers across the Northeast. Once you hit that 1.2Tb cap, you’ll be forced to pay an extra $10 for every extra 50GB you use. We’re fiercely against this idea, and want to be as clear as possible about our future plans:

netBlazr will never impose a data cap on any customer

Why is Comcast doing this now?

So that they can charge you for “unlimited data”, and take advantage of the fact that millions of customers are now, due to no fault of their own, racking up high data usage while working or studying from home. As a network provider however, we want you to understand that more people working remotely doesn’t mean ISPs are under extra strain.

There is categorically, no evidence that data caps do anything to lessen the strain on ISPs. The above graph shows that higher daily use due to WFH still does not reach the evening “peak”. We wrote on this blog back in April about the fact that consumers don’t need to worry about extra strain on their ISPs while working from home, as ISPs design their networks to handle the peak of traffic anyway. Comcast themselves even came to this same conclusion in the spring!

Will I break the cap? Probably, yes.

Comcast is arguing that only 5% of their customers exceed this 1.2Tb total on a monthly basis. That’s still currently over 1 million customers however, and thanks to millions of households currently supporting parents and children working or studying from home at the same time, the % of households that will break that cap is growing fast.

In 2020, the average American is streaming up to 8 hours a day. Using figures provided by Netflix that suggest an hour of streaming requires 3GB, that means 1 person, just through daily average streaming could use 720GB alone each month! Remember, this is before any other data usage that will be incurred by other internet use! 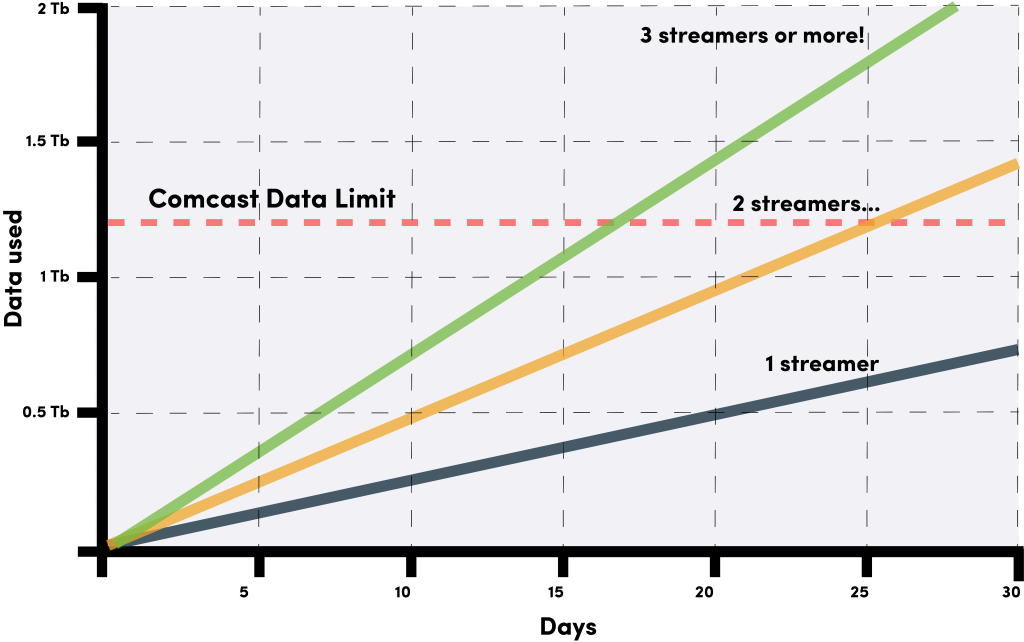 That means come the spring, many 2+ person households will be forced into paying overage fees of $10 per 50GB (only two days’ worth of streaming!) or coughing up an extra $30/mo for an unlimited plan.

There is no empirical reason for Comcast to introduce these caps that could lead to an improvement in service. There is only a trap laid for a growing amount of Americans to fall into. With even more substantial typical price hikes coming this January, is this really a level of service Bostonians can continue to tolerate?

What Can I do?

Ditch amoral monopoly providers. Support your local ISP, and get a plan with no data caps: period.